Growing up I was always told never to talk about religion or politics at the dinner table. Where is the line is drawn on the internet? There is a freedom in typing things that normally would have made me uncomfortable to say aloud.

To make things straightforward and honest, I voted for Hillary Clinton. I recognize that she is not perfect, but I do not believe that any politician has a halo. I do not like Trump for a plethora of reasons. Although Clinton did win the popular vote, the electoral college has made Donald Trump our 45th president. I respect our democracy, and I respect Obama’s urging from us as citizens to comply with a peaceful transfer of power. I accept that Donald Trump is our president and I hope for the good of our country that he does a better job than my fears anticipate.

Yet, through this respect, I am fortunate enough to live in a country that allows me the freedom to voice my opinion. So, on Saturday, January 21st, I marched. At first, it was my grandmother’s idea. I had heard about the rallies, but one night at dinner she brought up marching together with my cousin. In all seriousness, I had not thought that these plans would follow through. As the day approached reality began to sink in. I was going to march in New York City with throngs of angry men and women.

Don’t get me wrong, I am a feminist. I believe in women’s rights. I love learning about the evolution of women’s rights and of the strong women who have fought for them. But the fear of actually leaving my articles and books and presenting myself for the whole world to see frightened me.

Once arriving at the parade, I was shocked by the calm excitement. While initially, this sounds like a combination that could not exist it is an energy that must be experienced first hand to understand. Men and women crowded the streets, and I was continuously ducking my head to avoid posters from stabbing my eye out. I was shocked by the positivity. There wasn’t anger but rather solidarity that encapsulated a community of strength and hope rather than sitting at home in the shrouds of fear. I was also shocked by the children. Mother’s pushed their sons in strollers and daughters were perched on the shoulders of their fathers. I was overwhelmed and yet at peace. While there were, of course, angry chants directed at Trump that was filled with anger, so much of this march was surrounded by the safety of unity. The rights of such minorities would not be overlooked in these next four years, and fellow citizens took it upon themselves to protect one another.

It was pretty badass.

I came back to my dorm that night filled with the excitement of doing something. I acted for the first time instead of just speaking. It was scary, thrilling and empowering. At the same time I was left with the reality that although I had marched for my rights as a woman, it was not enough. While I will retweet activists on Twitter, it is not sufficient. I realized that day saying I stand with refugees, Muslims, immigrants, African Americans and LGBTQIA from the corner of my comfortable room is not enough. As a white woman, I am fortunate to have privileges that many men and women unfairly do not have. I have recognized that is no longer enough for me to say how unfair it is or remain “P.C.” in conversations. That won’t change anything. I believe the people in this country deserve change. So I am hoping to improve myself. To use my privilege to add to the voices of so many to make sure that their messages are heard.

For right now I am not certain where to begin. The thought of standing up in front of the world honestly does scare me. But I refuse to use it as a crutch. While I am not sure where this will take me, I hope to post about my experiences on here.

So I broke the dinner table rule. We have two choices: feel an awkward silence, or join forces. I have made my decision and hope others will do the same for whatever they feel passionate about. 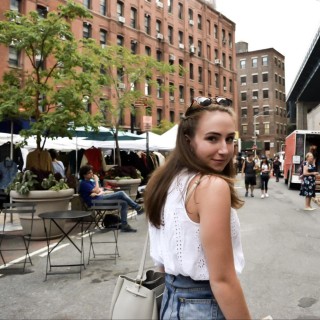